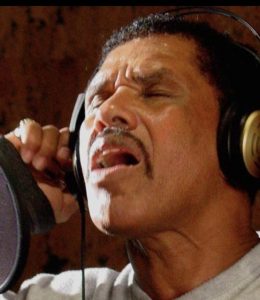 Winston Francis was born in Kingston, Jamaica in 1948. He attended school there and started learning the printing trade before moving to Miami with his family at the age of sixteen. He then went to music school where his music teacher Chuck Bird, the great impresario, writer and performer, spotted Francis’ talent: ‘If I didn’t know better, I would’ve thought it was Nat King Cole singing’ he told the young man.

Bird was not only the driving force behind Francis, he also gave him his first break in the music industry, setting him up to play at the Fountain Blue Hotel in Miami in 1965 with the Jackie Gleeson Orchestra. His first show found US politician Spiro Agnew in the audience.

Francis began to go back to Jamaica on a regular basis and became one of the band singers for Carlos Malcolm, working alongside Derrick Harriott and Boris Gardiner as the band toured the Caribbean and the USA. He also started recording at the famed Coxson’s Studio One in Jamaica, collaborating with foremost reggae artists including Dennis Brown, Bob Marley and Bob Andy amongst others.

In 1971 Francis became popular in the UK with his first album Mr Fix It. His cover of the Mamas and the Papas’ classic California Dreamin’ was Tony Blackburn’s Hit Pick of the Week on Radio One for two weeks straight and it was this single that brought him over to London. A little known fact about the ‘B’ side of California Dreamin’ (Too Experienced) is that the backing vocals were actually done by Bob Marley and Bunnie Wailer , despite the fact that everyone thought such high-pitched voices could only belong to women!

From 1972 Winston Francis started performing regularly all over the UK on the club circuit. At the same time he did some recordings for EMI and it was then that he met and began to work with renowned reggae producer and performer Dennis Bovell– although they would not collaborate on a major project until 1993. The late 1970s and early 1980s saw Francis doing a lot of session work including backing vocals and studio work.

Between 1980-86 Francis had a complete change of career, becoming a youth and social worker in Brixton, from which he got great satisfaction. But music continually beckoned, and in 1987 Francis returned to his first love. He sang backing vocals for the Jamaican group The Melodians and then started performing regularly with the London-based Trevor Star and The Skaticians . Popular in Europe in particular, Francis is still a member of this ska/ rock steady band.

In 1993 Dennis Bovell asked Winston Francis to cover the classic Ben E. King number, Stand By Me for a compilation album, Jamaican Soul. The song was released as a single in France where it sold over 90,000 copies. Bovell then produced His Majesty Requests , a solo album which Francis brought out under the name King Cool. Showing his diversity, Francis has also continued to do backing vocals for various bands from soul to hip-hop, from reggae to musicals, all the while drawing on his huge talent and great wealth of experience.

Winston Francis has known Linton Kwesi Johnson since the 1970s, and their collaboration on the album Sweet Rock Steady was a meeting of minds. Singing classic rock steady tunes, Francis evokes real nostalgia for that unforgettable era of Jamaican music (1966-68) which bridged the gap between ska and reggae. The arrangements were done by veteran producer John Kpiaye.